Tame Harsh Vocals
Vocals are almost always the focal point of any production, so it goes without saying that they need to sound great! A bright, sparkly vocal is one of the most common trademarks of a professional mix. But what happens when you are given a vocal track that is so bright and sparkly that it’s too harsh to listen to?
You could even get caught in a situation where the processing that is making the vocal harsh has been printed into the vocal. You might be compelled to simply reach for an EQ, turn down some highs with a static cut, and call it a day. But we’re going to walk you through some different, more dynamic approaches that are likely to get you better, more professional results.
What Do We Mean by “Harsh”?
Usually, the word “harsh” refers to any sound that is brittle, thin, ear piercing, and hard to listen to. To get a better idea of what we mean, think of a distorted guitar tone played through an amp that sounds like its treble knob was dialed in five notches too high. White noise is another example of a very harsh sound.
Method 1: Low-Pass Filter or Parametric EQ Cut
Like we said before, you may be tempted to fix harshness by reaching for an EQ and using a low-pass filter or parametric cut to get rid of some high end, as shown in the plots below. While this may work sometimes, it would not work as well for dynamic performances where the vocalist is singing in different parts of their range.

Low-Pass Filter
Let’s say the high end of the vocalist’s voice is harsh in the chorus, but in other parts of the song where the vocalist is singing more calmly, the high end is sitting just right. In a situation like this, making a static EQ cut in the high end of the vocal could end up leaving the choruses sounding good, while the quieter parts of the song are left sounding too dark.
Method 2: Multi-Band Compression or Active EQ
Another way that you could tame harshness in a vocal is by using multi-band compression or active EQ! These types of processing are preferable to static EQ, as they are dynamic and can adapt to the vocal performance.
Choosing between an active EQ and a multi-band compressor mainly depends on how precisely you want to process the vocal. If large bands of the high end are particularly harsh, then a multi-band compressor would be preferable, as it’s generally used on wider ranges compared to active EQ. 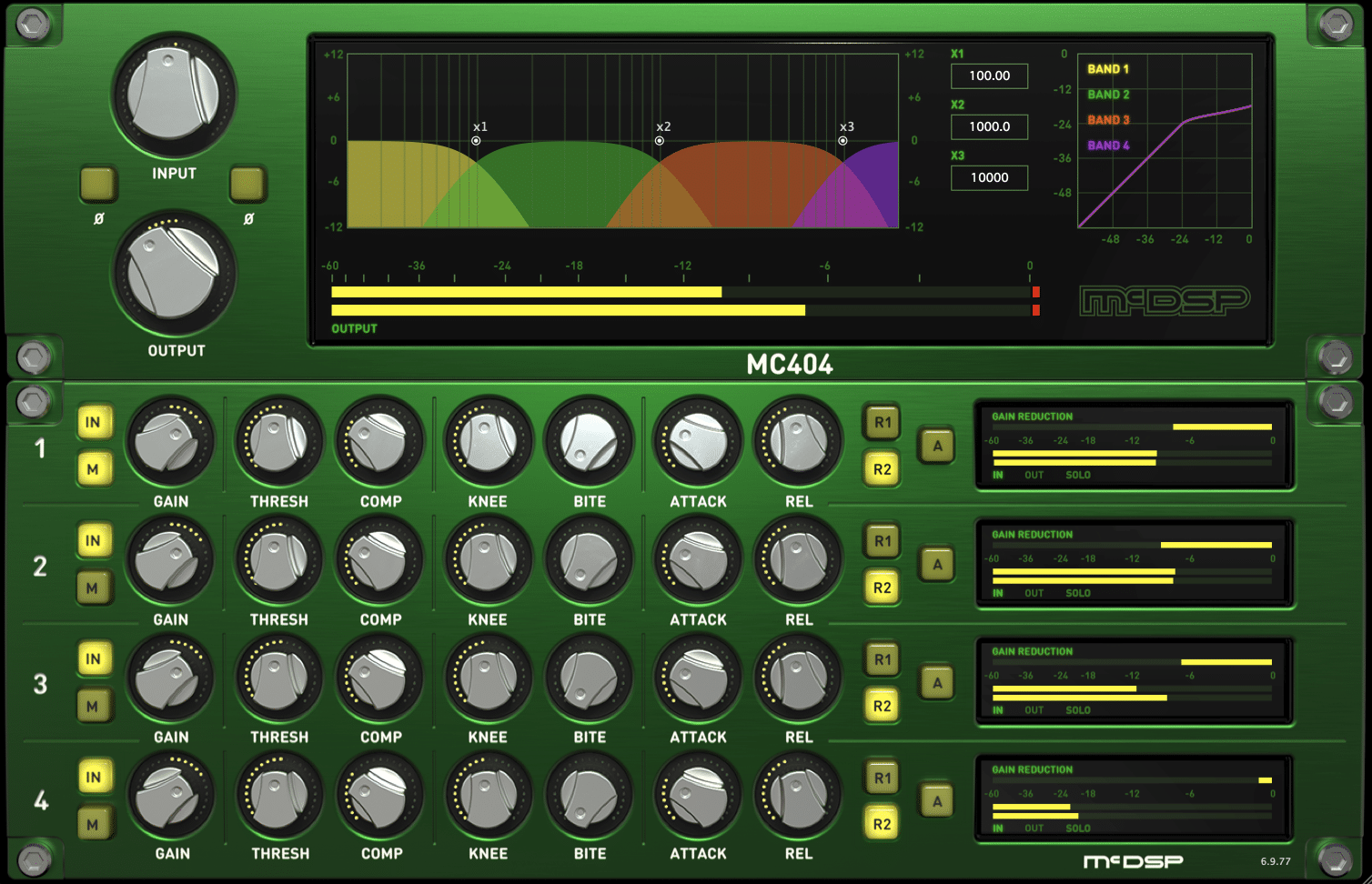 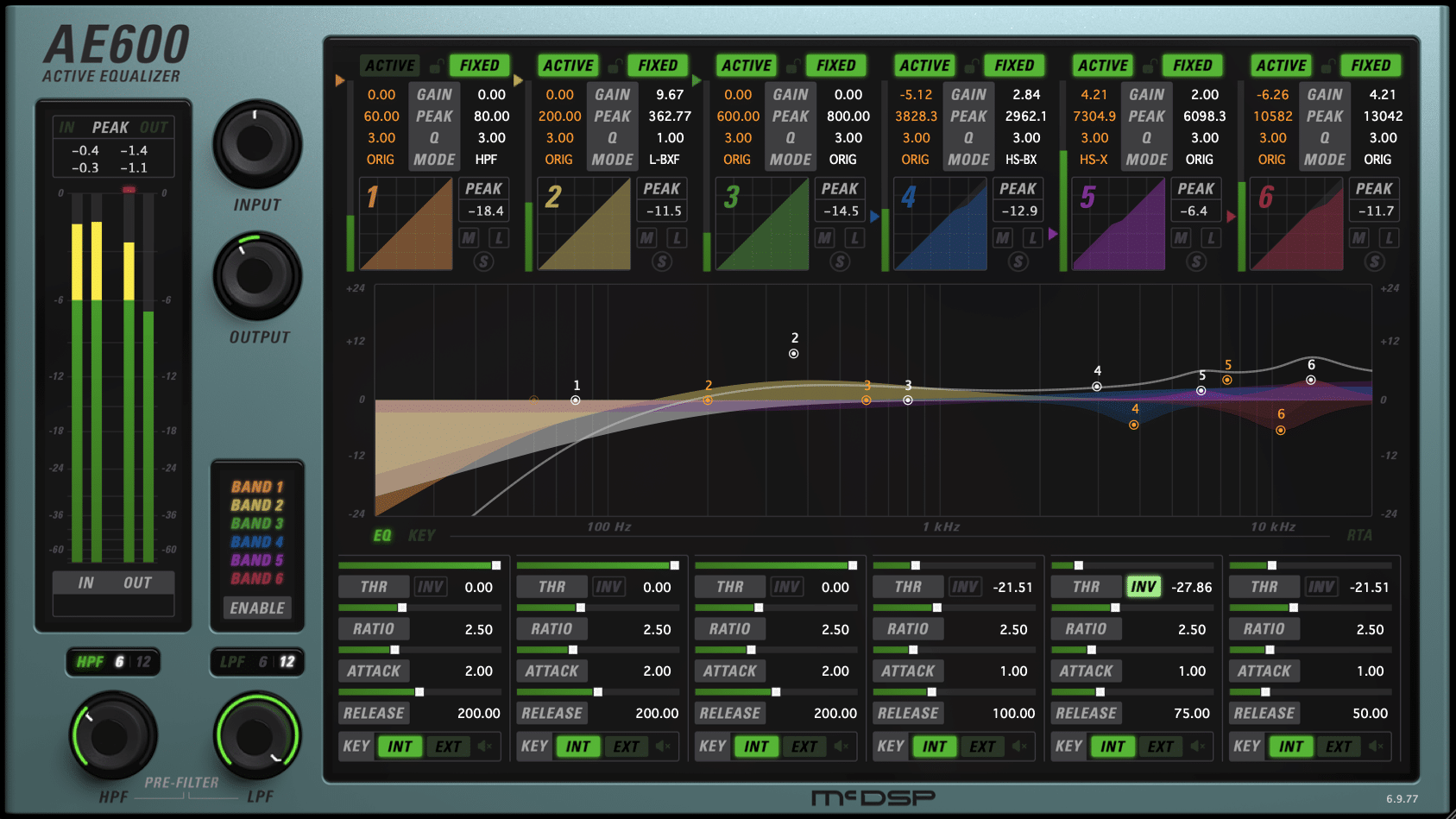 AE600 Active EQ
On the other hand, if you’re looking for precise control over a narrow range of frequencies, it doesn’t get much better than an active EQ! That leads us to our next method for taming harshness in a vocal.
Method 3: The McDSP SA-2 Dialog Processor
A great way to tame harshness in a vocal is by using the McDSP SA-2 Dialog Processor! The SA-2 is an intelligent 5 band active EQ that is perfect for taming harshness in dialog, vocals, guitars, and more. 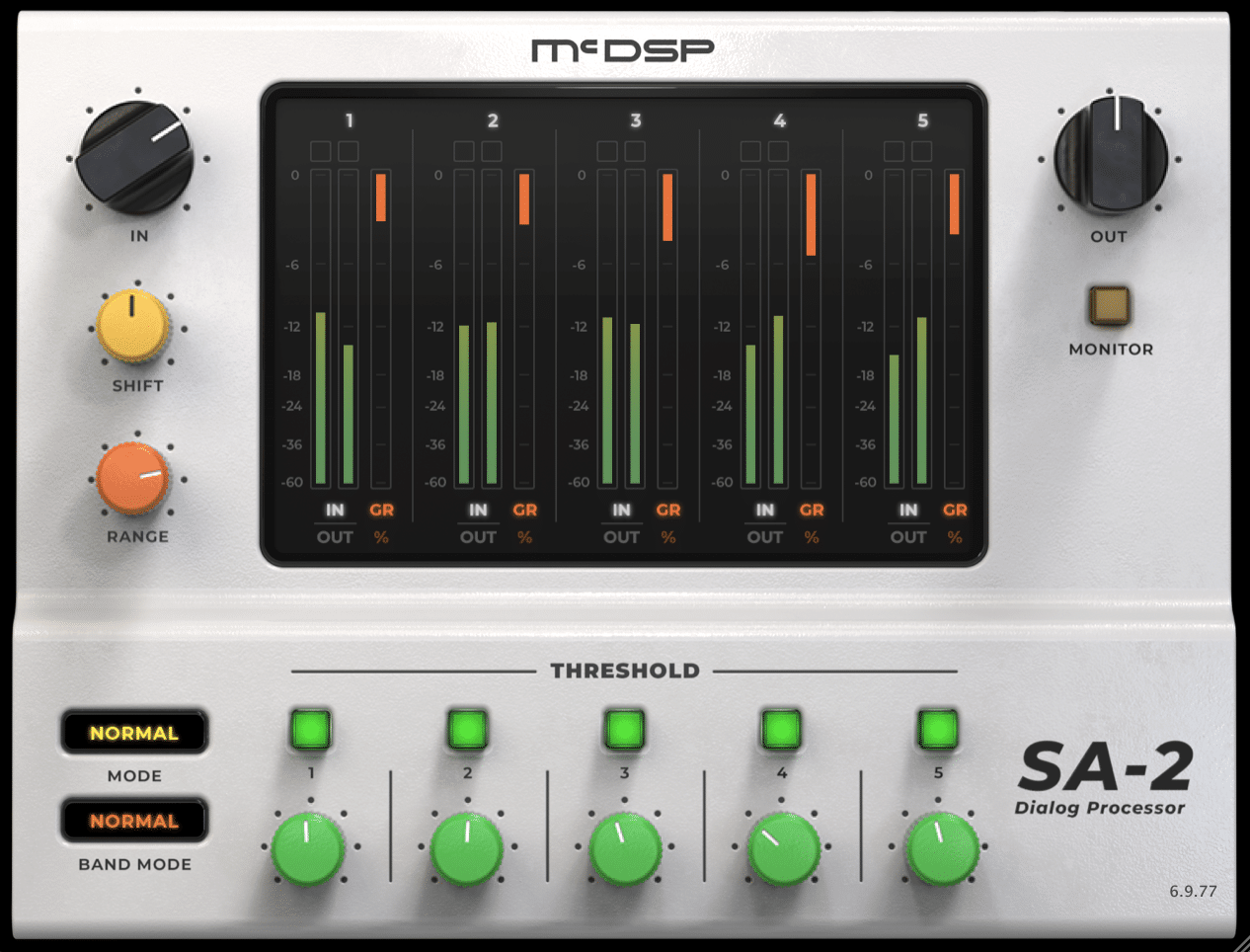 SA-2 Dialog Processor
In fact, it’s quite perfect for this application because you don’t even have to think about dialing in frequency knobs. Simply turn down the threshold for each band and that’s it! Want to make a broad change to the thresholds of all the bands at once? Turn the input knob up or down and compensate for the change with the output knob.
How Does it Sound?
Check out the audio examples below to hear what the SA-2 sounds like when it’s taming some harsh vocals! Pay attention to the way the vocal goes from too thin and brittle to much fuller with the perfect amount of high end.
Curious about the settings we used in this example? Check out the SA-2 screenshot above to see them!

Want to check out the SA-2 for yourself? Try out a free 14-day, fully functional SA-2 Dialog Processor trial here.
We hope you learned something new! Be sure to sign up for our newsletter below to stay up to date on all things McDSP. We’ll see you next time!
NEWSLETTER SIGNUP
Company
AboutContactDealersPress
QuickLinks
ShopDemosSubscribeEducationPrivacy Notice
NEWSLETTER SIGNUP