Multi-Band Limiting – Why You Need it
Let’s say your mastering limiter sounds like it’s unnaturally pumping at random times and you can’t figure out why. If you’re working on a particularly dense production, it may be very difficult to figure out what’s causing this. You may even check the gain reduction meter on your mastering limiter and still have trouble pinpointing the problem. Enter the multi-band limiter.
Placing a multi-band limiter on your master bus before your final mastering limiter will make it much easier for you to find that pesky, subtle element in the background that’s just barely poking out too much and causing problems. Using a multi-band limiter is a very easy way to eliminate these problems, making life easier for both you and your mastering limiter and leaving you with a better master overall.
Let’s get into a bit more detail on why using a multi-band limiter on your master buss is a great strategy.
Identify Potential Issues
Like we just mentioned, multi-band limiting can make it very easy to pick out balance issues in your mix that you might not have noticed otherwise, as they generally provide a visual representation of the frequencies in each band’s frequency range. This is especially helpful if you’re mastering within a mixing session!
For instance, let’s say your low-end monitoring situation isn’t very good and you don’t have the ability to mix on a sub. As a result, you can’t hear low-end very well, if at all, which makes it hard to judge if your mix’s low-end is sitting right.

Extreme Low-End Attenuation on a Master Bus
However, let’s also say that when you put a multi-band limiter on your master bus and bring the threshold of every band down to the same level, like we did in the screenshot above, your lowest bands are doing significantly more attenuation than bands in the other parts of the frequency spectrum. This is a good sign that something is likely going wrong with your low end.
Save Time
It’s very commonplace for mastering engineers to work on mixes without having control over the individual faders from the mixing session. For example, if the snare is too loud, a mastering engineer has to figure out a creative way to turn it down, as they don’t have access to the original individual tracks. Similarly, a mastering engineer might receive a mix with consistent unwanted buildup in a specific frequency range across all elements of a mix.
Multi-band limiting is the perfect remedy for these situations. A multi-band limiter can deal with select ranges of frequencies to clean up a mix, or even adjust the balance of individual parts relative to one another. Using a multi-band limiter is also much faster than asking the client for a new rough mix. Save time. Save sessions.
It Makes Life Easier for You and Your Mastering Limiter
Have a look at the waveforms in the screenshots below. A master limiter will have a much easier time processing the more consistent looking waveform on the left, while it might struggle to reign in the aggressive drum peaks in the waveform on the right without pumping unnaturally.

A Dynamically Inconsistent Mix
Using multi-band limiting can help us get closer towards a more dynamically consistent mix, like the one on the left, thus making it easier for our master limiter to deliver a louder, more powerful master and eliminating the headaches that dynamic inconsistencies can cause.
Do It All in One Plug-In: The McDSP ML8000 Advanced Limiter
Want to apply all the techniques we’ve mentioned in this post within a single plug-in? Look no further than the ML8000 Advanced Limiter by McDSP! 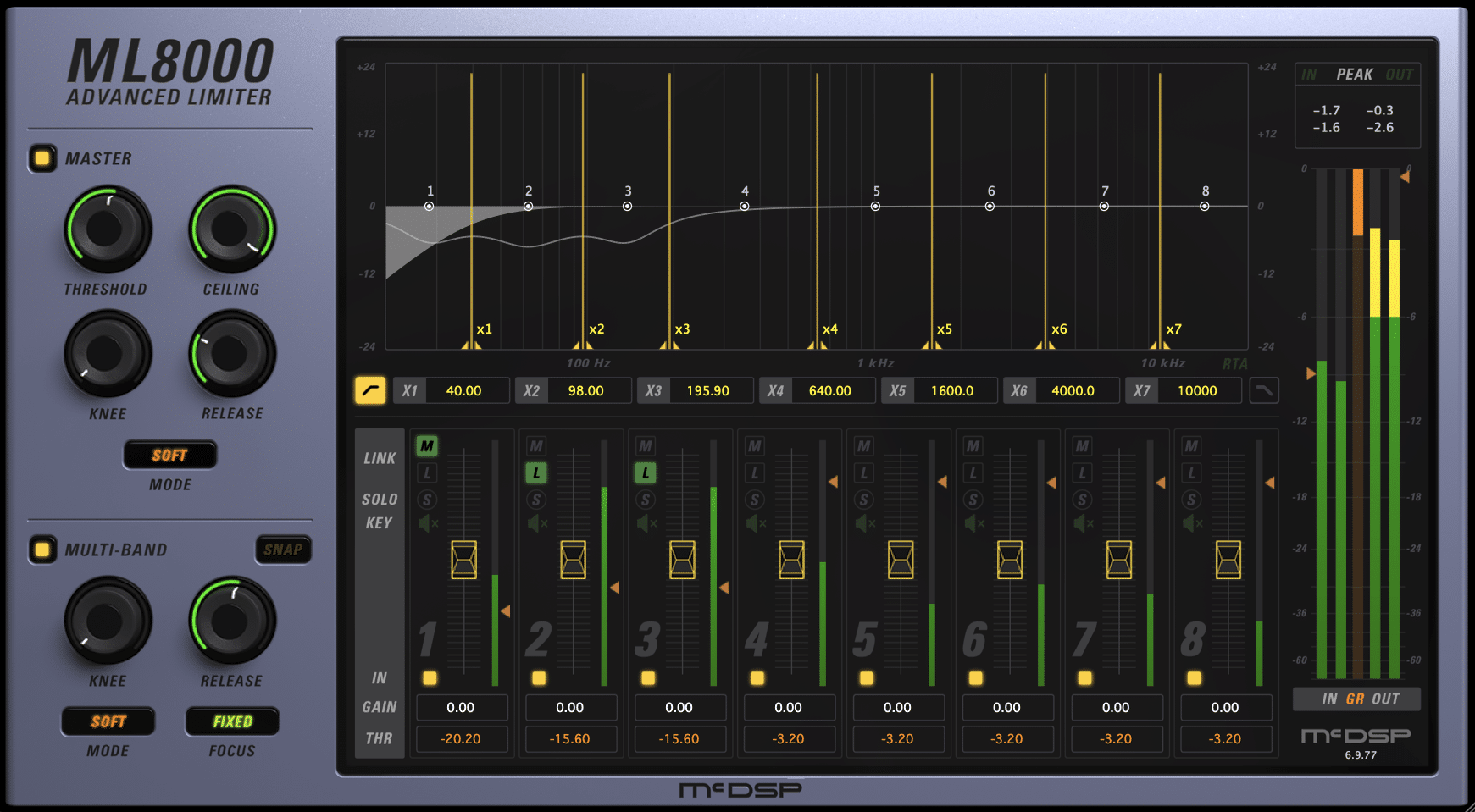 The McDSP ML8000 Advanced Limiter
The McDSP ML8000 Advanced Limiter is particularly perfect for this mixing technique because it is a multi-band limiter and master limiter combined into one plug-in. It features 8 bands of active processing, which prevents you from needing to worry about phase distortion at such a high band count, and link controls to make the process quick and intuitive.
If you’re a big fan of tweaking parameters to your hearts content, it even features 6 different modes alongside knee and release controls for both the multi-band and master sections! Once you’re done dialing in your multi-band settings, use the ML8000 to get the final limiter on your master bus going and you’ll be well on your way to dynamic, loud, and powerful mixes.
What Does It Sound Like?
To hear what the ML8000 can do for your masters, check out the audio examples below! In the first clip where the ML8000 is bypassed, notice how boomy and unbalanced the low-end is. In the second clip we engaged the ML8000’s Master Limiter section but we did not engage the multi-band section. As a result, the low-end is pushing the master limiter too hard, causing the track to sound too pumpy and distorted.
However, once both the multi-band and master sections are engaged in the final clip, listen to how much more balanced the master sounds overall. Since the multi-band section comes first in the chain, the low-end is being tamed by the multi-band section and it’s no longer pushing the master limiter too hard.
Curious about the settings we used in these clips? Check out the ML8000 screenshot above to see them!

Want to check out ML8000 for yourself? Try out a free 14-day, fully functional ML8000 Advanced Limiter trial here.
As always, we hope you learned something new! Be sure to sign up for our newsletter below to stay up to date on all things McDSP. We’ll see you next time!
NEWSLETTER SIGNUP
Company
AboutContactDealersPress
QuickLinks
ShopDemosSubscribeEducationPrivacy Notice
NEWSLETTER SIGNUP