Mixes Need Air
“Now I’m going to add some top end to this vocal to give it some air.”
This is one of the most common phrases you’ll hear music producers say, but what does it mean? Like many other adjectives that producers use such as “boxy” and “dull”, “air” is one of the most common words in any music producer’s vocabulary. Regardless, it is not a very self-explanatory term.
So, why is air so important and why are audio engineers always talking about it? Let us explain!
What is “Air”?
The term “air” refers to the portion of the frequency spectrum that’s above around 16 kHz, so you can think of air as the extreme high-end in a source! Usually, air is added to a source by using a high-shelf filter as shown below, but it can also be added with a parametric EQ curve. Try both and see what you like!

Adding Air to a Source with an EQ
Why is Air so Important?
Now that we’ve established what air is, let’s go over why it’s so important. “Airy” frequencies are usually accentuated on many elements of a mix, and sometimes even on the mix buss itself, to make a source sound more professional in general.
This is especially true for naturally high-end heavy sources such as cymbals, and prominent, upfront elements such as vocals. That’s because, whether they realize it or not, many listeners are very used to hearing well-balanced sounds with a good amount of high-end air that helps them cut through the mix.
Additionally, the human ear is particularly attracted to low-end and high-end frequencies. That’s why many consumer-level headphones and speakers have a frequency curve that boosts highs, boosts lows, and cuts mids! Having a balanced low-end and high-end can make the difference between a listener loving or not loving your mix.
Knowing when Enough is Enough
In this post, we’ve talked a lot about how great air is and why it’s so important. However, when adding air to your mixes, always remind yourself that high-end is a very fragile section of the frequency spectrum.
By that we mean that it’s very easy to go overboard and add too much air to a source, making it harsh and thin. As a result, whenever you’re boosting a lot of high-end in a source, it’s a good idea to do so little by little, take a break, and revisit your EQ moves with fresh ears to make sure you didn’t get too carried away.
The 4020 Retro EQ
Speaking of adding air to your productions, we’ve got the perfect plug-in for just that. Meet the 4020 Retro EQ by McDSP! 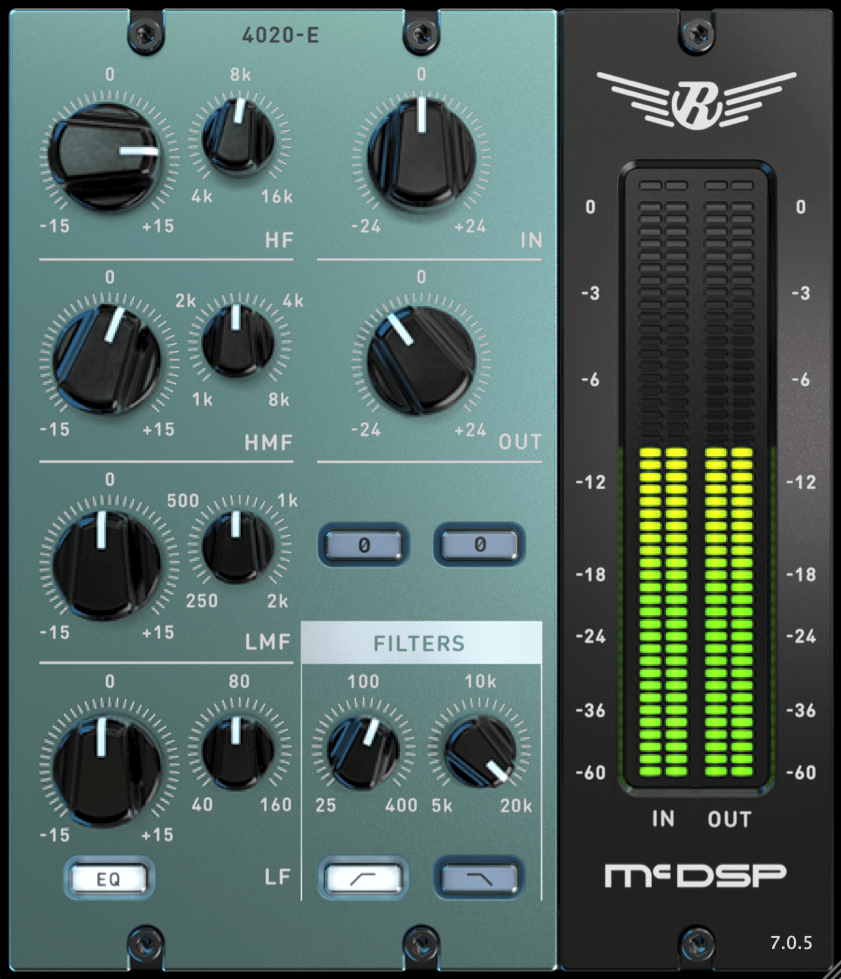 The 4020 Retro EQ by McDSP
The 4020 is the perfect EQ not only for adding high-end to your sources, but also for any of your EQ needs in general! The 4020, as well as all the other plug-ins in McDSP’s Retro lineup, were designed with unique sonic characteristics and a retro vibe in mind. The best part is that none of them are modeled after any hardware, which means they have their own unique sound!
Additionally, the 4020 provides you with an incredibly smooth sound thanks to its gain dependent variable slope/Q system. This forces the width of the 4020’s bands to become narrower when performing more drastic cuts and boosts. Similarly, the plug-in’s low-pass and high-pass filters utilize a split-octave design that gradually increases the filter slopes from 6 dB / Oct to 24 dB / Oct.
What Does it Sound Like?
Check out the clips down below to hear the 4020 Retro EQ in action, and don’t forget to look at the above 4020 screenshot to see the exact settings we used in this example.
Take note of the fact that all we’re doing is adding 10 dB of air at 8.1 kHz with a high shelf boost, adding 3 dB of high-mids at 2.8 kHz, and rolling off some low end with a high-pass filter at 185 Hz. A couple high-end boosts and low-end roll off later and now this vocal is full of life, and it feels much more intimate!

Want to check out the 4020 for yourself? Try out a free 14-day, fully functional 4020 Retro EQ trial here.
As always, we hope you learned something new! Be sure to sign up for our newsletter below to stay up to date on all things McDSP. We’ll see you next time!
NEWSLETTER SIGNUP
Company
AboutContactDealersPress
QuickLinks
ShopDemosSubscribeEducationPrivacy Notice
NEWSLETTER SIGNUP