How To Use Multi-Band Expansion
Multi-band compression is an incredibly popular type of processing that producers can utilize for a wide variety of tasks. However, what if you took multi-band processing in the opposite direction by boosting the volume of specific frequency ranges instead of attenuating them? If you did, you would have a multi-band upwards expander. Let’s talk about it.
What is Expansion?
An expander works like a compressor in that it uses a threshold-based processing algorithm. A compressor will attenuate when the signal level is above the threshold, whereas an expander will attenuate or boost when the signal level is below the threshold. An expander that attenuates is referred to as a downward expander and an expander that boosts is referred to as an upward expander. In this post, we will be focusing on upwards expansion.
In the screenshots below, notice how the gain reduction meter on the left-hand side compressor shows the source being turned down, or attenuated. However, on the right-hand side expander, you can see that the lights on the gain reduction meter are moving upwards from 0 dB, signifying that the signal level is being boosted instead of attenuated. 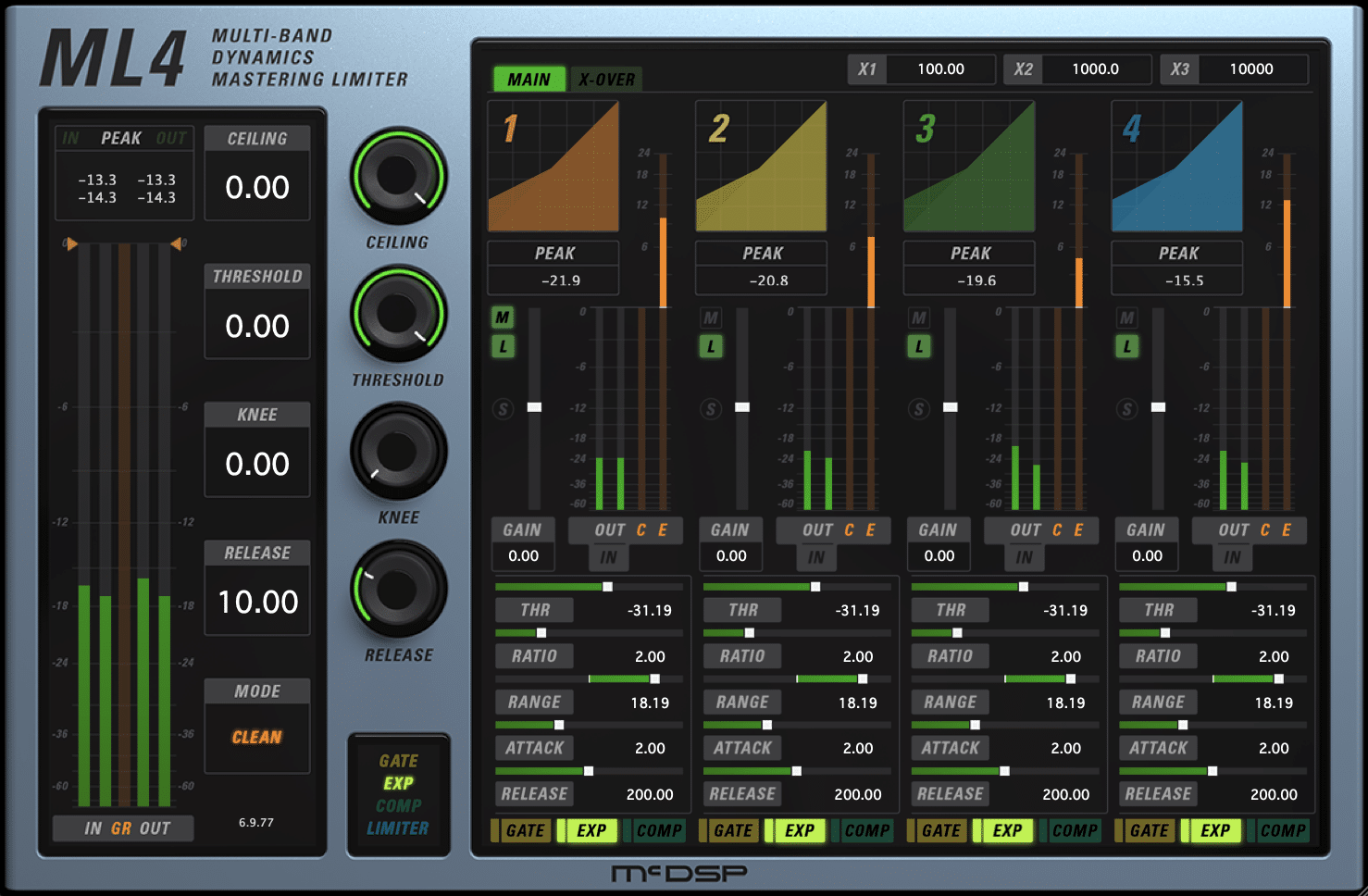 Multi-Band Upwards Expansion in Action
For instance, perhaps you have a particularly dynamic guitar track where the guitarist plays a section full of low notes before moving onto a lead line that’s played higher on the fretboard. The high notes sound great and don’t need any additional brightness, but the low notes sound muddy and dull.
This is a perfect use case for multi-band upwards expansion! Dial in a high-end band and set the threshold such that it doesn’t boost when high notes are played, but that it does when low notes are played. In this way, you should be able to add some brightness to the parts with low notes without having to worry about making parts with high notes too bright and harsh.
The McDSP 6034 Ultimate Multi-Band Plug-In
Looking to try out multi-band upwards expansion for yourself? Look no further than the 6034 Ultimate Multi-Band plug-in by McDSP!

Upwards Expansion on the 6034’s Third and Fourth Module Slots
When You Shouldn’t Use Top-Down Compression
The 6034 includes all the award-winning compression, expansion, and gating modules from the 6050 Ultimate Channel Strip plug-in, but the 6034 allows you to use them all in a 4-band multi-band configuration! The crossover filter slopes can be configured as 6, 12, or 24 dB/Oct, and metering includes gain reduction and output levels on each individual band.
Also, just like the 6050, all modules are listed from least aggressive (top of the module list) to most aggressive (bottom of the module list), and modules can be swapped on the fly while retaining their relative settings! That means the 6034 not only sounds great on whatever you throw at it, but it’s also incredibly easy to integrate into your workflow and experiment with.
Want to check out the 6034 for yourself? Try out a free 14-day, fully functional 6034 Ultimate Multi-Band trial here.
As always, we hope you learned something new! Be sure to sign up for our newsletter below to stay up to date on all things McDSP. We’ll see you next time!
NEWSLETTER SIGNUP
Company
AboutContactDealersPress
QuickLinks
ShopDemosSubscribeEducationPrivacy Notice
NEWSLETTER SIGNUP