A De-Esser Dynamically Attenuating a Signal
Like we mentioned before, a de-esser dynamically attenuates harsh high-end frequencies in a source, whereas any changes that an EQ makes are static. That means that the amount of gain reduction that de-essers perform is constantly changing, while boosts and cuts from an EQ will always perform the same amount of attenuation or boosting regardless of the source material.

A de-esser will only react when you need it to, but if you use an EQ to tame intermittent harsh high-end you could end up making your source too dark overall.

Not Just for Vocals
Now that we’ve established what de-essing is and why it’s so useful, let’s talk about some use cases.
Usually, when people think of de-essing the first thing they think of is vocals, but de-essers can be used for much more than just that. Not only is it common to use de-essers on vocals, but they’re also commonly used on other sources with lots of high-end, such as cymbals, electric guitar, and distorted bass guitar. You could even use a de-esser on your master buss! 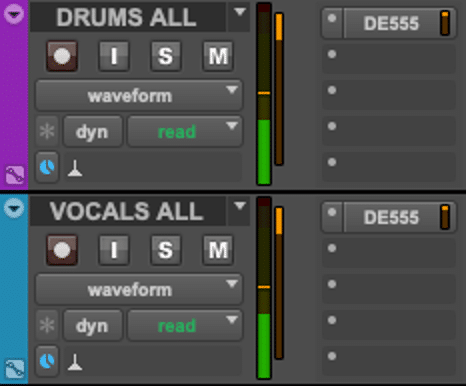 Using a De-Esser on a Vocals and Drums Aux
At the end of the day, remember that a de-esser behaves very similarly to a multi-band compressor, except a de-esser is designed to work specifically on high-end. Don’t be afraid to try it out on anything with offensive harshness!
The McDSP DE555 Plug-In
If you’re looking for a de-esser plug-in but don’t know where to start, check out the McDSP DE555 Advanced De-esser plug-in! 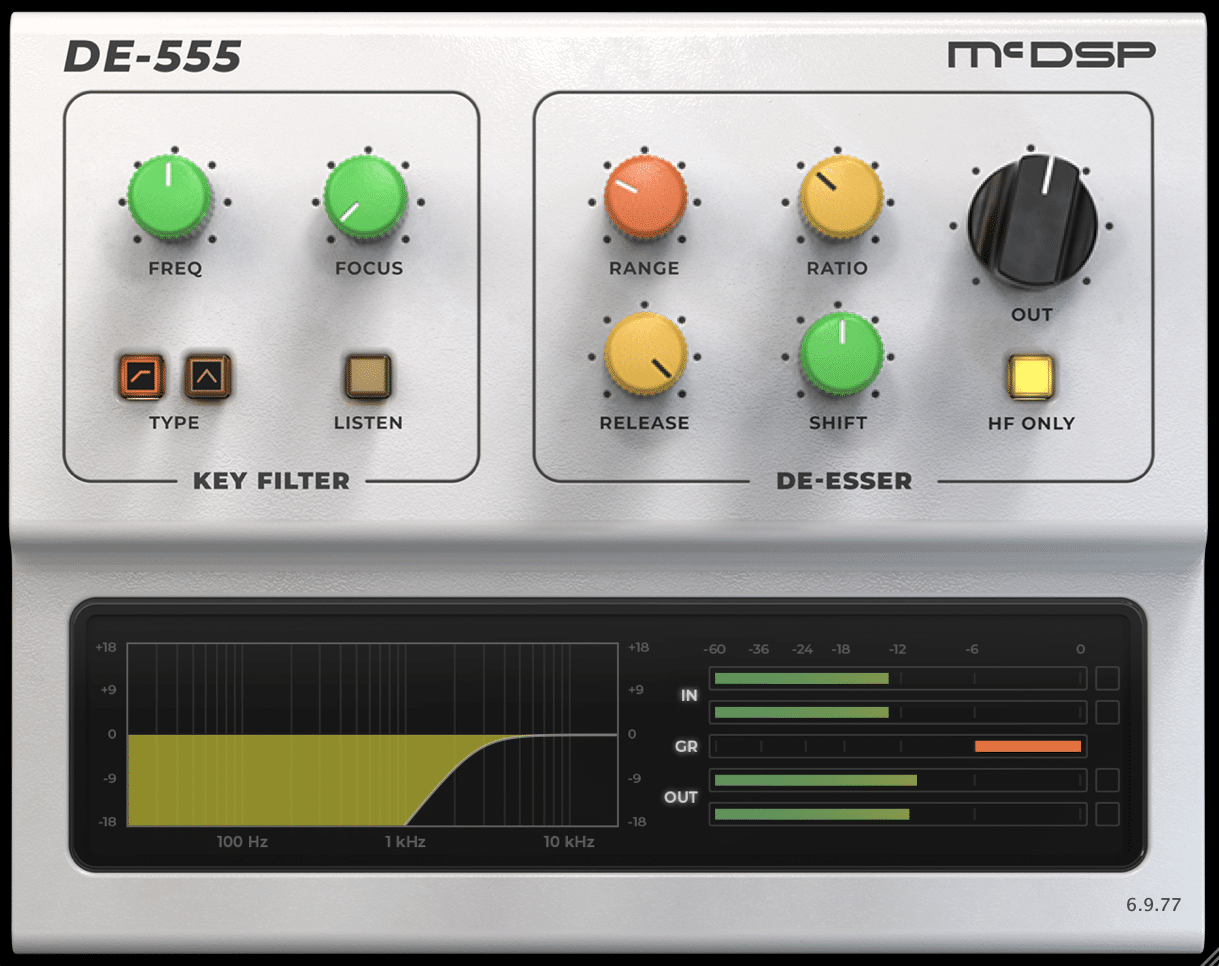 The McDSP DE555 Advanced De-esser Plug-In
The DE555 provides transparent, precise de-essing with unique flexibility. It’s particularly unique in that it does not rely on signal level to process and reduce sibilance, which could require that the user continually adjusts their sensitivity controls (such as an input threshold level) for consistent performance. Instead, its intelligent signal analysis and look-ahead technology allows it to consistently, transparently, and naturally de-ess at any signal level, eliminating the need for a threshold control altogether.
Additionally, the DE555 features continuously adjustable ratio and release controls, a high frequency (HF) only mode for reducing the signal level of only the harshness instead of the overall signal, alongside various other controls that give you as much control as you could possibly need.
What Does it Sound Like?
Just so you could get an idea of just how versatile the McDSP DE555 Advanced De-esser plug-in is, down below we’ve provided an example where we used it on some drum overheads!
Notice that, with the DE555 bypassed, this overhead track sounds quite bright and harsh. However, once we engage the DE555, the harshness gets dynamically tamed without making the cymbals dull or too dark. It even sounds like the overhead track sounds a bit fuller!
Curious about the settings we used in this example? Check out the above DE555 screenshot!
Want to check out the DE555 for yourself? Try out a free 14-day, fully functional DE555 trial here.
As always, we hope you learned something new! Be sure to sign up for our newsletter below to stay up to date on all things McDSP. We’ll see you next time!
NEWSLETTER SIGNUP
Company
AboutContactDealersPress
QuickLinks
ShopDemosSubscribeEducationPrivacy Notice
NEWSLETTER SIGNUP